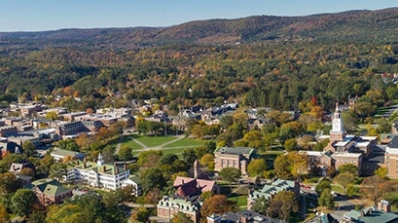 Our energy systems should be as diverse and local as possible.

Planners are considering a portfolio of sustainable energy solutions.

Work has continued on the Dartmouth Green Energy Project during the COVID-19 pandemic. The initiative to improve energy resiliency, sustainability, and efficiency on campus by replacing the institution's century-old central steam-heat system with new energy generation and distribution systems has broadened to include the investigation of a number of energy systems.

The pandemic and its economic fallout have given Dartmouth officials time to evaluate all aspects of the energy project, which has three major components—developing new heat-generation options to replace use of No. 6 fuel oil in the central heating plant; converting the distribution system that delivers heat from the plant to campus buildings from a steam-heat system to a high-efficiency hot-water system; and converting buildings to using hot water, improving overall efficiency.

"After careful evaluation, Dartmouth has determined that the previous plan, which called for replacing the central heating plant with a new plant that used biomass, to be developed and operated by a private partner, was not the right path forward, and we've stopped that part of the project," says Josh Keniston, vice president of campus services and institutional projects.

"Instead, we're prioritizing the conversion to a hot-water system, which will result in greater energy efficiency, more-comfortable heating levels across campus, and will provide a flexible platform to adopt new technologies. Over time, we want to move away from a single, central generation facility and explore options for a distributed system that uses a range of sustainable energy sources."

Dartmouth has taken the opportunity during this year's construction season to increase its efficiency quotient by adding high-performance, low-energy systems to new construction and renovation work underway on campus.

Dartmouth is expanding the evaluation of alternative heat sources and considering geothermal systems and solar thermal, and continuing to add to rooftop solar photovoltaic installations while also looking into future development of a large-scale solar photovoltaic field. Such a portfolio could protect the institution from future upheaval in the economy, forestall supply-chain disruptions, and more easily meet the sustainability and efficiency goals set three years ago by President Philip J. Hanlon '77, says Keniston. In addition, diversifying generation technologies would allow Dartmouth to phase in new systems over time and spread out the cost of significant upgrades at a time when the institution is anticipating financial losses as a result of the pandemic.

"Our energy systems should be as diverse and local as possible," says Rosi Kerr '97, Dartmouth's director of sustainability.

'Leaving the Next Generation in a Strong Position'

While details of the systems that would be used to generate heat are still being considered, a portion of Dartmouth's new low-temperature hot-water distribution system will be in place to provide hot water to the Center for Engineering and Computer Science and the Arthur L. Irving Institute for Energy and Society, both of which are under construction and scheduled for completion in 2021. The distribution system to the West End is about 15% of the planned campus-wide hot-water system.

In preparation for the future hot-water heating network, low-temperature hot-water systems have been installed in Anonymous Hall, the Indoor Practice Facility, and Reed Hall. System designs have been developed for more than 100 buildings on campus, including Dartmouth Hall, which is scheduled for major renovation to begin in 2021. The hot-water conversion projects will incorporate energy efficiency improvements that are estimated to reduce current building greenhouse gas emissions by more than 30%. 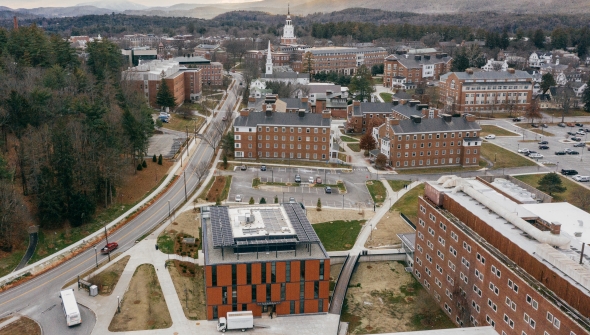 The solar photovoltaic installation can be see on the roof of Anonymous Hall, in the bottom center of the photo. (Photo by Robert Gill)

Using low-temperature hot water to provide heat to buildings is estimated to be 20% more efficient than the current steam system. It also provides the opportunity to generate heat with efficient, renewable-energy sources such as heat pumps and geothermal energy. The switch from steam to hot water—the largest part of the financial investment in the Green Energy Project—will mean eventually replacing steam pipes in most of the buildings on campus.

"As we looked closely at our options, it became clear that investing in a new large-scale and centralized facility didn't make sense for the long term as emerging options appear to favor a more distributed approach," Keniston says. "By reducing our energy use through efficiency, changing our distribution system to hot water, and investigating a variety of energy systems, we can leave Dartmouth's next generation in a strong position, in terms of the cost to run the system and its resilience and reliability," says Keniston.

Dartmouth can meet the greenhouse gas emissions reduction targets in President Hanlon's 2017 pledge using heat pump, geothermal, and solar-thermal systems to provide about 65% of the campus heating and cooling needs, according to a Dartmouth study. The rest of the heating energy could come from high-efficiency hot-water boilers that would replace the existing steam boilers in the heating plant and would use more efficient No. 2 heating oil or biodiesel fuel, resulting in lower emissions than the No. 6 fuel oil now used in the steam system.

The combination of hot-water conversion, building energy-efficiency improvements, and new energy-generation systems could reduce 2010-level greenhouse gas emissions by as much as 84%, says Kerr. Hanlon's goals include reducing greenhouse gas emissions from 2010 levels by 50% by 2025 and by 80% by 2050. They also call for transition from No. 6 fuel oil to 50% renewable sources by 2025 and 100% by 2050; and for establishing a better system to distribute energy across campus, which is happening with the hot-water system.

Energy-Efficiency Projects in the Works

Dartmouth has continued to increase its focus on energy efficiency, an approach that makes the campus more operationally and economically resilient and makes the buildings more comfortable for those who use them. New facilities and major renovations, including Anonymous Hall, the Center for Engineering and Computer Science, the Arthur L. Irving Institute for Energy and Society, and Dartmouth Hall, have been designed for high-performance and low-energy footprints.

Other examples of recent energy-efficiency and green energy work:

Susan Boutwell can be reached at susan.j.boutwell@dartmouth.edu.