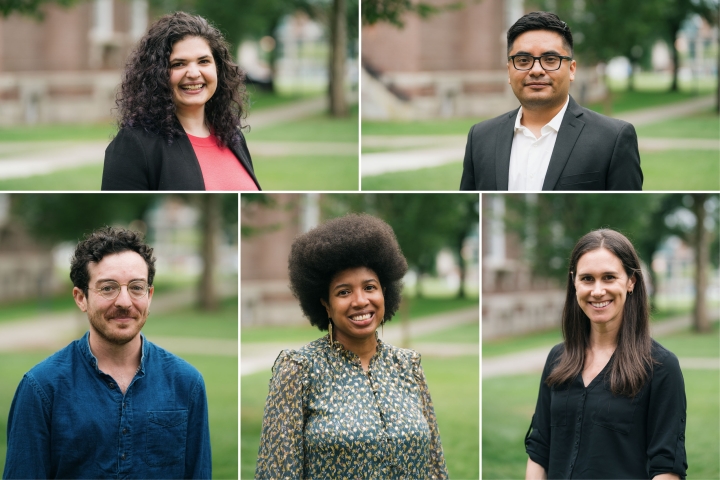 The five postdoctoral scholars who joined the Society of Fellows this month represent the fields of English and creative writing; geography; history; Latin American, Latino, and Caribbean studies; and women’s, gender, and sexuality studies, but their research transcends those disciplines.

“We try to be very interdisciplinary and sometimes transdisciplinary,” says Mona Domosh, the program director and the Joan P. and Edward J. Foley Jr. 1933 Professor of Geography. A group like the Society of Fellows “has to be able to speak across the divides.”

Among the new scholars are a physical scientist who studies precipitation patterns to understand climate change and someone who uses black feminist ethnography to understand housing injustice, says Domosh. The society is always looking for people “who can start solving or help us solve some of these pressing issues,” which requires transdisciplinary interests and expertise.

Founded in 2014 by President Philip J. Hanlon ’77, the Society of Fellows fosters the academic careers of scholars who have recently received their PhDs, allowing them to pursue their research and gain mentored experience as teachers and members of the departments or programs in which they are located.

During the paid three-year fellowships, the postdocs pursue their own research and teach two courses, with support from the Dartmouth Center for the Advancement of Learning. The society, which is part of the Guarini School of Graduate and Advanced Studies, currently includes 16 postdoctoral scholars; eight faculty fellows; and several faculty affiliates, whom the postdocs have chosen as mentors.

Pamela Crossley, the Charles and Elfriede Collis Professor of History and one of the society’s founding members, stepped down in June after completing her second three-year term as a faculty fellow, “so we’re very, very sad about that,” Domosh says.

The Society of Fellows sponsors weekly meetings, where scholars might workshop a paper, proposal, or book chapter they’re working on, or practice a formal presentation for a job interview or conference, Domosh says. It also works to create a social group, by hosting monthly dinners and other events, “because we know a lot of important work happens outside the framework of a session.”

This term will kick off with seven-minute talks by each member of the new cohort, who will introduce themselves and discuss their research.

“We’re just so excited to learn from these amazing young scholars,” says Domosh. “They’re coming here to learn from us, but really it’s a back and forth.”

The descriptions below are compiled from the fellows’ statements on the Society of Fellows website. Dissertation: “I Changed My Sex!: Pedagogy and Trans Narrative”

RL Goldberg studies trans gender theory and phenomenology; their teaching and work focus on mid-century United States literature and culture, queer theory, Black feminist studies, and critical carceral studies. Their first book project is titled I Changed My Sex! Pedagogy and Trans Narrative and explores the language trans writers use in giving an account of trans identity as espistemologies of knowing, feeling, and certainty. RL’s work has appeared in, or is forthcoming, from TSQ: Transgender Studies Quarterly, Philip Roth Studies, ASAP/J, the Los Angeles Review of Books, McSweeney’s, the Paris Review Daily. Dissertation: “Indigenous Worldmaking in a World of Crisis: Race and the Making of the Migrant Circuit Between Southern Mexico and the U.S./Mexican Pacific Coast, 1968-1994”

I am an interdisciplinary historian whose work focuses on social movements, labor, migration, and race between the United States and Mexico. My first book project examines the history of Indigenous people from Oaxaca as they were incorporated as a new racialized labor force in the agro-industries along the U.S./Mexican Pacific Coast. Inspired by my training in the Black Radical Tradition and my commitments to the Oaxaqueñx community, my book centers what I term “Indigenous Worldmaking” to describe the efforts by Indigenous people to recreate their communal lives across multiple landscapes and alongside the people they met along the way. At Dartmouth, I will be working on additional publications related to Indigenous expressive culture and social movements, while also teaching courses related to transnational migration and Latinx-Native American politics. Miriam Rich is a historian of medicine and science in the modern United States, with a particular focus on the historical contexts of racial health disparities. Her first book project, under contract with Columbia University Press for its Race, Inequality, and Health series, explores how the biological category of “monstrosity” interfaced with developing concepts of race, reproduction, and embodied deviance in the 19th- and 20th-century United States. She has previously written about the racialization of pain in nineteenth-century obstetrics, the social and political contexts of 20th-century vaccination policy, and the resurgence of historical concepts of race in contemporary genetics and genomics. Her planned second book project focuses on the history of health and medicine within U.S. carceral systems. Before joining the Society of Fellows, she was a lecturer at Yale University, where she taught courses on the history of health and incarceration; the history of reproductive health and medicine; and the history of race, citizenship, and public health in the United States, and she also serves as a historical research consultant for a project with Yale’s SEICHE Center for Health and Justice, which examines historical and present-day contexts of pandemics in prisons. Dissertation: “Investigating the Relationship Between Atmospheric Moisture Transport and Precipitation in the Eastern United States”

Natalie Teale is a physical geographer with specialization in hydroclimatology and applied climatology. She uses methods and concepts from climatology, hydrology, and geography to examine the interactions between the climate system and the hydrologic cycle. Her scholarship is centered on precipitation patterns, including variability in regional precipitation, impacts of heavy precipitation, and linkages with atmospheric moisture. In her PhD, she used machine learning to identify major pathways of water vapor transport through the eastern United States and investigated how these patterns changed through the 20th and early 21st centuries, thereby contextualizing observed variability in regional precipitation within the larger framework of climate change. At Dartmouth, she will use a regional climate modeling approach to understand how variability in magnitude and phase of cold-season precipitation affects local streamflows and flood regimes, with particular focus on the impacts of rain-on-snow events. Sa Whitley is a black feminist ethnographer of capitalist urbanization and housing justice movements. Their current book project, “The Collective Come-Up,” examines the community economic development models and urban planning strategies of black queer and transgender women in the afterlife of the subprime foreclosure crisis. The interdisciplinary manuscript is situated at the intersection of Gender Studies, Cultural Anthropology, and Black Geography, offering a rigorous political reflection on racial capitalism and the ways that black activists figure the post-crisis financial and real estate markets as sites of both subjection and possibility. Tracing local convergences between feminist urban design and black resistance to gentrification, “The Collective Come-Up” also contributes to scholarly conversations about architectural preservation, queer economies, and urban revitalization. Whitley’s research has been supported by the UC Consortium for Black Studies, the Center for the Study of Women, and the Pembroke Center for Teaching and Research on Women. Whitley is a co-author of “The Power of Debt: Identity and Collective Action in the Age of Finance,” published by the UCLA Luskin Institute on Inequality and Democracy, and a forthcoming article in TSQ: Transgender Studies Quarterly.