Posted on September 28, 2021 by Office of Communications

Discussion focused on strategic goals, from the academic mission to student well-being. 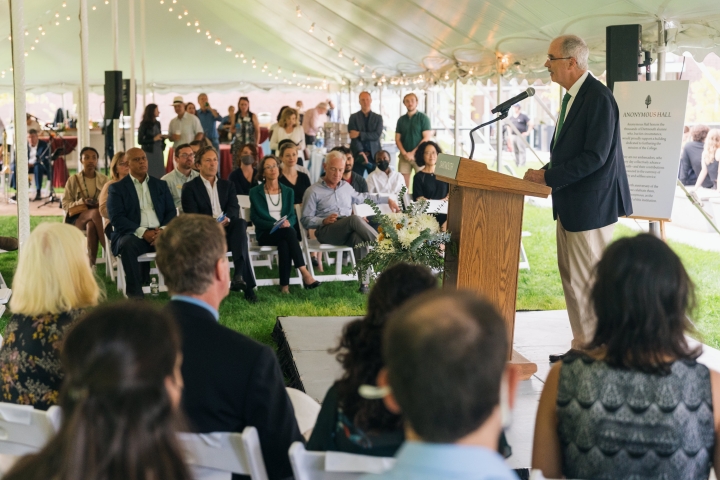 Lempres said she was thrilled to be meeting in Hanover for the Thursday-through-Saturday-sessions (Sept. 23-25) as she enthusiastically welcomed board members in advance of the meetings.

“We may not be fully ‘back to normal,’ but I think you’ll be energized the minute you step foot in Hanover,” she said.

Still, the COVID-19 delta variant remains a concern and board members and senior leaders gathered in separate indoor locations on campus and held sessions over Zoom and outdoors. In addition, trustees had coffee and doughnuts at two outdoor locations with undergraduate, graduate, and professional school students on Saturday morning.

We’ve dared to take on some of the most urgent issues facing humankind and make the bold investments to do so.

The meetings were brimming with energy as the board—the composition of which has completely turned over since President Philip J. Hanlon ’77 was appointed almost nine years ago—had a look at progress made by the president on the mandate given to him in 2013, as he began his presidency.

Dartmouth has made considerable, lasting progress on that trustee directive—to significantly advance the excellence of Dartmouth’s academic enterprise, said Hanlon.

“We have elevated our ambitions,” he said. “We’ve made impressive progress over a very short period of time in undergraduate admissions, in the quality of the faculty scholars we’ve hired, and the care we’ve taken in stewarding our resources.”

As examples, Hanlon cited investments in financial aid, the academic cluster initiative, and the introduction of outstanding postdoctoral programs.

“We’ve dared to take on some of the most urgent issues facing humankind and make the bold investments to do so. Our investments in centers and institutes and in the West End of campus are tangible representations of our ambitions and markers of our success.”

Other markers of success include:

Board members talked via Zoom with Jandel Allen-Davis ’80, MED ’84, the new chair of the External Advisory Committee for the Campus Climate and Culture Initiative (C3I), and with Shontay Delalue, who began this past summer as the new senior vice president and senior diversity officer. C3I, which was launched in 2019, is part of a comprehensive set of initiatives designed to create a more welcoming, inclusive, and equitable learning environment for all Dartmouth students, faculty, and staff.

The advisory committee’s 2021 report recommends that Dartmouth should more clearly articulate its vision and strategy for C3I and determine a timetable for frequent review of progress made. In addition, the report suggests coordinating the various aspects of the three campus climate initiatives developed under President Hanlon—C3I, Moving Dartmouth Forward, and Inclusive Excellence—to “move toward an integrated vision and action plan.”

Said the report, “Many of the right individuals are now in place to begin this work in earnest and there is still much to do, not only in order to meet the initiative’s objectives but also to create substantive and sustained change.”

“Each of these three initiatives has moved Dartmouth forward in its own way,” said Delalue. “As part of my introduction to Dartmouth, I have been assessing what each one has accomplished. I look forward to sharing with the community a comprehensive plan that binds this crucial and interrelated work together and puts Dartmouth on a path toward becoming more welcoming and inclusive.”

A Community Where Students Will Thrive

Interim Dean of the College Scott C. Brown detailed for trustees the increased mental health resources in place for the start of the academic year, which include a 50% increase in clinical staff with additional representatives from BIPOC, LGBTQ, and international communities. Brown assured trustees that any student who presents an urgent need will be seen that day and for more routine visits the waiting time is only three or four days.

Brown also provided an update on Dartmouth’s work with the Jed Foundation’s signature JED Campus Program. JED is a nonprofit that works to protect emotional health and prevent suicide for teens and young adults.

Working groups consisting of students, faculty, and senior leadership have been established at Geisel, Guarini, Thayer, Tuck, and in the Arts and Sciences. They will develop a plan to support students’ mental health needs. Each committee will complete a 50-page self-study developed by JED that explores the institution’s mental health policies and procedures. All students will then take a “Healthy Minds” survey that asks for their feedback on Dartmouth’s mental health climate and resources. Each school is partnered with a JED adviser who works closely with each working group throughout the process.

After receiving this feedback, JED advisers and content experts will come to Dartmouth in the spring to meet with the committees, hold student focus groups, and work with each school to create a strategic plan for the schools and the Arts and Sciences based on information collected in the surveys, self-study, and site visit. Dartmouth will then implement those strategic plans, evaluating the progress of the initiatives in the fourth year of the partnership. A follow-up “Healthy Minds” survey will also be administered in year four.

“I am proud that Dartmouth is ensuring that all of our schools are receiving dedicated support from JED along with our undergraduate students,” said Brown.

Trustees also discussed long-term strategy for undergraduate and graduate student housing, which includes the addition of new facilities, such as the graduate school housing soon to open on Mount Support Road in Lebanon, and the renewal of existing housing stock on campus.

“Fundamental questions about residential life—what role residential life should play in a Dartmouth education and how we provide an optimal residential experience for our students—are among the most pressing strategic issues facing Dartmouth today,” said Executive Vice President Rick Mills.

Mills stressed that increasing funds for institutional renewal has been a priority since the beginning of President Hanlon’s tenure. From fiscal years 2014 through 2021 the annual renewal fund has grown from $18 million to $31 million. That figure rose when, in 2018, Hanlon added $1.5 million annually, which has brought the value of the fund to $39 million. This is in addition to the $130 million in endowed funding created by the board’s decision in March to establish an infrastructure renewal fund.

At the conclusion of Mills’ presentation, the board approved finalizing design documents and preordering materials for an estimated $50 million renovation of Andres, Zimmerman, and Brace Commons, a social space adjacent to the two residence halls in the East Wheelock housing cluster.

Innovation and Success: The Call to Lead

The board received a report on the progress of The Call to Lead, Dartmouth’s seven-year campaign to prepare the next generation of leaders to take on the world’s greatest challenges. Bob Lasher ’88, senior vice president for advancement, described how the campaign has mobilized charitable investment in Dartmouth’s strategic vision while growing one of its core sources of income. Dartmouth has significantly strengthened access and affordability, intensified interdisciplinary research, dramatically expanded experiential learning opportunities, and completed the most comprehensive investment in the student-athlete experience in its history. The board will dedicate five major capital projects this academic year realized through campaign support. Campaign commitments total $2.93 billion to date.

“The stakes are high in the competitive landscape of higher education,” observed trustee and campaign co-chair Greg Maffei ’82. “Philanthropy is uniquely able to provide the speed and scale of investment necessary to drive Dartmouth’s distinction. The results are exciting and increasingly evident around campus.”

Lasher referenced the national attention Dartmouth has earned for its innovative campaign design, especially in its focus on emerging constituencies within Dartmouth’s alumni body. Women, entrepreneurs, and international and young alumni have played an unprecedented role in The Call to Lead’s achievements to date. More than 56% of alumni (48,000) have contributed.

The trustees discussed $390 million in remaining programmatic priorities as the campaign enters its final phase. The priorities are organized around three themes: attracting the most talented students through financial aid, sparking innovation and creativity through integrated learning districts in the West End and arts districts, and supporting a healthy and welcoming campus community.

“Dartmouth is approaching a milestone that has been achieved by few institutions: a $3 billion investment in our future. This should be a point of pride for every member of our community,” said Ellie Loughlin ’89, a trustee and campaign co-chair, noting that Dartmouth was achieving this with a smaller alumni base than those of peer institutions. “We thank every person who has supported the College’s vision. But there is more work to be done as we make the best Dartmouth possible for future students.”

With the fall term well underway, Interim Provost David Kotz ’86 updated the board on the institution’s COVID-19 management strategy. Dartmouth continues to monitor several important metrics related to the pandemic: positivity rates on campus, positivity rates in the surrounding community, compliance with vaccination and testing policies, and isolation capacity. After discussion with student leaders, faculty, and staff, Dartmouth leadership has decided to maintain its existing COVID-19 policies around testing frequency, face coverings, and athletic facility access at this time.

“We are pleased that positivity rates have remained low since the beginning of the term, and that we are aware of no known transmission of COVID-19 between any student and a staff or faculty member,” said Kotz. “However, given that we are still working to ensure that our students, faculty, and staff are testing at the required frequency, and that we are seeing continued prevalence of COVID-19 throughout the region, we believe it is premature to relax the precautions that we currently have in place.”

Pending positive outcomes along these measures, the institution plans to reevaluate these policies by the end of this week.

Board members visited the renovated Dartmouth Outing Club house and traveled to view the progress on the graduate housing complex, which is under construction in neighboring Lebanon. They attended the dedication of Anonymous Hall, the home of the Guarini School as well as the linguistics department and, temporarily, the Russian and computer science departments.

Several trustees stayed in town for Saturday’s football home opener against Sacred Heart University, which was the first game at Memorial Field since November 2019 and resulted in a rout by Dartmouth, 41-3.

Joining the board for their first meetings were the newest trustees—Neal Katyal ’91; Joyce Sackey ’85, MED ’89; and Scott Stuart ’81. Also present were board members attending their first meeting in Hanover—Sue Finegan ’85; James Frank ’65; Odette Harris ’91; Susie Huang ’84, and Gregg Lemkau ’91.