2021 in Review: A Year of Adaptation and Connection

Posted on December 10, 2021 by Hannah Silverstein

In the face of a global pandemic, the Dartmouth community showed its strength. 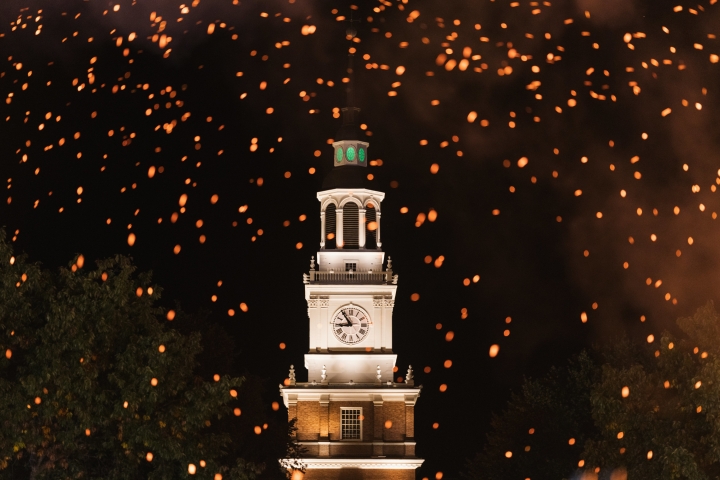 Sparks from the 2021 homecoming bonfire were some of the signs of renewed life on campus this year. (Photo by Eli Burakian '00)
Body

A year of adaptation and renewed bonds: That's how 2021 at Dartmouth is likely to be remembered.

The year began at the height of the COVID-19 pandemic that pushed Dartmouth faculty, students, and staff to discover novel ways of accomplishing what in other years we all might have taken for granted—everything from how to go to class to how to experience wonder in the outdoors.

It hasn't been easy—and the pandemic may not be done with us yet—but with empathy, perseverance, and openness to unexpected joy, the Dartmouth community has shown its true strength.

Here's a look at some of the key events Dartmouth News covered on and off campus in 2021. A new normal had set in on campus last January as classes resumed in a hybrid format, with about half of the undergraduate community arriving in Hanover while the other half enrolled remotely. In Hanover, students, faculty, and staff were getting used to masking up and regular COVID-19 tests—and to what then-Provost Joseph Helble called "embracing winter," with numerous social activities taking place outdoors.

Members of the community began to receive the newly available COVID-19 vaccines—for which some of the key research groundwork was laid at the Geisel School of Medicine.

Among the term's highlights, a gaming-themed Winter Carnival promoted both remote and in-person events and extended over most of February, coinciding with Black Legacy Month, which offered storytelling, film, music, and more in a celebration of Black women, including the late theater trailblazer Lorna C. Hill '73. The Bema was transformed into a wonderland of color.

An architecture firm was chosen to lead the upcoming redesign of the Hopkins Center for the Arts. And to engage an intergenerational audience beyond Hanover, alumni relations launched Dartmouth NEXT, a virtual forum for ideas, conversation, and shared learning for a curious global community.

More than three dozen tenured and tenure-track faculty members joined the Dartmouth community, and Dartmouth saw record applications for the undergraduate Class of 2025 (and prospective students and their parents had questions answered in a podcast series hosted by the admissions dean Lee Coffin). As first-year students and seniors returned to campus for spring, students and faculty in the theater department created a hybrid experiment in radical joy. Dartmouth Idol transformed itself into a virtual extravaganza. Ski season continued into spring for Dartmouth women on the U.S. Cross Country team competing on the World Cup circuit.

Throughout May, Dartmouth celebrated Asian American Pacific Islander Heritage Month. And with COVID-19 numbers dropping in the late spring and early summer, the Class of 2021 celebrated commencement with family and friends at Memorial Field and an address by Pulitzer Prize-winning historian Annette Gordon Reed '81.

The Board of Trustees elected three new members and a new chair—Elizabeth Cahill Lempres '83, Thayer '84—and approved investment in upgrading critical infrastructure, to be funded by an increase in the annual endowment distribution. President Philip J. Hanlon '77 formed a presidential commission to study how to strengthen financial aid, and announced that students from families earning $125,000 or less would no longer be required to take out student loans. Dartmouth announced a partnership with the Jed Foundation to improve mental health issues on campus. Eileen Chamberlain Donahoe '81 and John Donahoe '82 gave $20 million toward increasing the representation of historically underrepresented groups in science, technology, engineering, and mathematics (STEM) fields. The Guarini School of Graduate and Advanced Studies launched a diversity advisory group to work on diversity, equity, and inclusion.

In leadership news, Helble accepted the presidency of his alma mater, and David Kotz '86, who served as interim provost before Helble's selection, took up the mantle again. With the community logging their COVID-19 vaccinations, summer term promised to be a transitional moment as the campus community prepared for a return to more normal operations in the fall. The warmer weather brought students outside to learn whitewater skills and to enjoy meals at the Moosilauke Ravine Lodge. The VoxLab theater incubator returned to campus, engaging past and present theater students. The Guarini School launched a new doctoral program in integrative neuroscience, and all eyes were on Tokyo as alumni and students competed in the Olympics—and shared their experience with Dartmouth News.

With a sense of normalcy returning, the COVID-19 task force that had guided Dartmouth from the beginning of the pandemic formally passed that responsibility on to a new leadership structure.

Shontay Delalue joined the Dartmouth community as the inaugural senior vice president and senior diversity officer. Scott C. Brown was appointed interim dean of the College. Duane Compton signed on for a second term as dean of Geisel. And Melody Brown Burkins, Guarini '95, '98, took the helm of the Institute of Arctic Studies.

Meanwhile, the Dartmouth website—including Dartmouth News—got a facelift. And Dartmouth released a strategic master plan that will help guide decision-making for the sustainable development of the campus over the long term.

Off-campus, the Hood made an impression in Washington, D.C., and the fashion world as Deb Haaland, the first Native secretary of the U.S. Department of the Interior, modeled an amazing pair of hand-bead boots from the contemporary Native American collection for a photoshoot. From any angle, it was a spectacular fall in Hanover.

But as it has since the pandemic began, the Dartmouth community continued to adapt—staging first-year trips for the first time in two years, as well as in-person orientation activities and matriculation ceremonies for the classes of 2024 and 2025. The board of trustees also returned to campus and dedicated Dartmouth's newest academic building, Anonymous Hall.

The "Year of Connections" launched with the return of homecoming and plans to celebrate three important milestones throughout the coming academic year: coeducation, the rededication to Native American education, and the founding of the Black Alumni at Dartmouth Association, all of which are turning 50. Members of the Dartmouth community remembered the 9/11 attacks and observed Veterans Day, and Tuck released a new strategic review and action plan for diversity, equity, and inclusion.

Philanthropy soared, as the Call to Lead campaign topped $3 billion—including history-making commitments of $379 million from Dartmouth women. Philanthropy was one driver of record endowment returns, which, among other initiatives, are helping Dartmouth recognize the contributions of employees and graduate students during more than a year of challenges. Dartmouth announced plans to explore new development—including undergraduate housing—on Lyme Road.

Among the notable honors members of the Dartmouth community received in the past year:

A paper on media coverage of the COVID-19 pandemic—co-authored by Ranjan Sehgal '22 and Professor Bruce Sacerdote—got major media attention. Tinotenda Kuretu '22 won a Verizon/Clinton Global Initiative 2021 grant to develop an app to help health care workers communicate with patients across languages. A team of engineering students partnered with students from Mexico to win the Moonshot Award in the 2021 Marine Energy Collegiate Competition for their concept of an ocean thermal energy conversion power plant. And an original song by Matt Haughey '21 became a runaway hit on Spotify.

Novelist Louise Erdrich '76—who will be in residence as a Montgomery Fellow this spring—won the Pulitzer Prize. Religion and Russian lecturer Sean Griffin, who came to Dartmouth as a postdoctoral member of the Society of Fellows, received a Luce/ACLS Fellowship from the American Council of Learned Societies, and visiting professor Tom Zoellner, Guarini '12, won the National Book Critics Circle Award. French literary scholar Lawrence Kritzman's colleagues published a collection of essays in his honor.