'A Solemn and Celebratory Occasion' 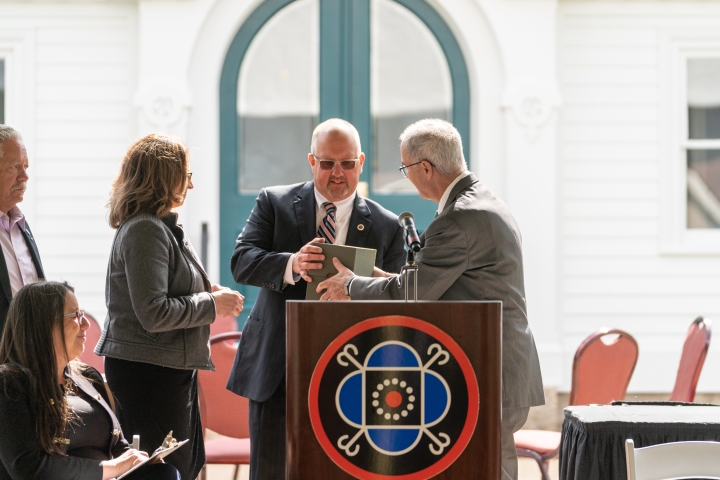 With laughter, drumming, and a few tears, the Mohegan Tribe on Wednesday formally received the papers of their ancestor, Samson Occom, the 18th-century scholar and Presbyterian minister who traveled to Great Britain to raise money for the school that would become Dartmouth College.

A delegation from Dartmouth, led by President Philip J. Hanlon ’77, presented the archival collection of letters, journals, sermons, and other texts to Tribal leaders at an outdoor ceremony at the Mohegan Church in Uncasville, Conn., on land that has been in Mohegan hands since before colonization. The historic event, which President Hanlon called “a solemn and celebratory occasion,” brought a critical piece of the past full circle for both Dartmouth and the Tribe.

“As we welcome our ancestor Samson Occom home, we are so hopeful that this is the beginning of a new chapter in the relationship between Dartmouth College and our Mohegan Tribe, one in which we move closer to Occom’s dream of an Indian education for Native students,” said Sarah Harris ’00, vice chairwoman of the Mohegan Tribal Council and a member of Dartmouth’s Native American Visiting Committee. The committee advises the president on Native American issues and had recommended that Dartmouth repatriate the papers.

“These papers represent not only the brilliant student and scholar Occom was, but the strength of the bonds that exist between Dartmouth and the Mohegan people,” Hanlon told the assembled group of about 80 people, which included a delegation from Dartmouth, members of the Mohegan Tribal government, representatives of the Brothertown Indian Nation that Occom helped found, and other invited guests.

At the ceremony, Hanlon presented Mohegan Tribal Council Chairman James Gessner Jr. and the Tribe with a box containing a representative sample of the full Occom archive being transferred from Dartmouth Library’s Rauner Special Collections Library to the Mohegan Cultural Preservation Center, as well as a commemorative glass bowl etched with the date of the day’s historic events.

In return, Gessner presented Dartmouth with a hand-beaded leather wampum belt, signifying the bond between the Mohegan people and Dartmouth. The wampum belt that the Mohegan Tribe presented to President Philip J. Hanlon ’77 on April 27 as Dartmouth repatriated Samson Occom’s papers to his Mohegan homeland. (Photo by Eli Burakian ’00)

“Purple and white wampum have different significances,” Medicine Woman Melissa Tantaquidgeon Zobel said after the ceremony. “Usually the purple means that there has been a history of conflict, and the white is a cleansing. So this is a joining of two peoples who have been in conflict but are now one in friendship.”

At the end of the ceremony, Chief Many Hearts Lynn Malerba and Tantaquidgeon Zobel wrapped Hanlon in a blanket, a traditional ceremonial honor.

Occom undertook his transatlantic fundraising journey in 1766 at the behest of his former teacher, the Rev. Eleazar Wheelock, whom Occom believed was launching a school that would serve Native American students. A portrait of the Rev. Samson Occom that hangs in the entrance to the Mohegan Church. The painting was done by Douglas Henry in 1997. (Photo by Eli Burakian ’00)

Though the voyage was an extraordinary success—raising more than £12,000 from donors in England, Scotland, and Wales, or the equivalent, according to the Tribe, of about $2.4 million today—Occom returned home to discover that Wheelock’s priorities for the school had shifted to focus on white students, a fact that Occom experienced as a “crushing disappointment,” Hanlon said. (Some of the donors at the time agreed, withholding a portion of the total pledged funds in protest of Wheelock’s changed mission.)

Indeed, between 1769 and 1970, Dartmouth graduated only 20 Native students. It wasn’t until 1970 that then-President John Kemeny “sought to turn this point of pain for Occom and, by extension, the Native community, into a point of pride,” Hanlon said, noting that more than 1,200 Native American students have graduated from Dartmouth since then.

“Understanding that the past could never be undone but that the future was ours to build, President Kemeny helped our beloved College take its first step toward righting the past, rededicating Dartmouth to advancing Native American education.”

Part of this first step was the founding of what is now Dartmouth’s Department of Native American and Indigenous Studies.

“It has taken far too long for these papers to be returned to where they’ve always belonged, but they are here now, accompanied by the spirit of Samson Occom that lives on in them,” Hanlon said.

In her remarks, Harris described a recent conversation with other Indigenous alumni in which they each described a struggle to feel as if they truly belonged at Dartmouth as undergraduates.

“The funds that established Dartmouth College were intended for the education of Indian people—if anyone should feel as though they belong at Dartmouth, it’s us,” she said. “Telling the truth of the College’s founding honors and gives life to Occom’s accomplishments and shows Native students that they’re foundational to the school and not just an afterthought. Truth—especially when it’s painful and difficult—is the birthplace of real meaningful change.”

Zachary Miller, the cultural heritage and Indigenous knowledges fellow at the Hood Museum of Art and Dartmouth Library and a member of the Chickasaw Nation, worked closely with College Archivist Peter Carini to prepare Occom’s papers for the Mohegans. Members of the Mohegan Tribe and the delegation from Dartmouth who were on hand for the repatriation ceremony on April 27. The Mohegan Church is the only parcel of land that has been owned solely by the tribe since before colonization. (Photo by Eli Burakian ’00)

“My favorite document is probably a letter Samson Occom wrote to his wife, Mary Occom, that documents his travels abroad,” Miller said. “Being new to Dartmouth and as an Indigenous person, it’s exciting for me to see the progress that Dartmouth’s been making with trying to reconcile its important histories.”

Jami Powell, curator of Indigenous art at the Hood, called the repatriation of the Occom papers “an incredible moment in Dartmouth’s history.”

Describing the work of the team that helped prepare the physical documents for their return to Mohegan, she said, “The most important thing that we learned through this process was that Mohegan people believe that when someone creates an object or writes something, part of their being is in that work. They see this as a homecoming of not just documents, but of a person. When the team understood that, it shifted the way we were thinking about the documents and really grounded our understanding of these materials in Indigenous ways of knowing.”

The relationships built in this process hold the potential for future collaborations, she says—including opportunities to bring the works of historic and contemporary Mohegan artists into the Hood’s collections.

‘A Day of Emotion’

After the ceremony, members of the Dartmouth community said they felt they had witnessed a historic moment. “Today is a day of emotion, because I’m so honored and pleased that we were able to witness history, this reconciliation between Dartmouth and one of our founding fathers, Samson Occom,” said Bruce Duthu ’80, the Samson Occom Professor of Native American and Indigenous Studies and one of nearly two dozen representatives from Dartmouth’s senior leadership, faculty, staff, trustees, and students attending the ceremony.

“What I will always treasure is the sense of welcome and gratitude from the Mohegan people. As long as it took for Dartmouth to do the right thing, they welcomed us with such grace and such warmth and love.”

Of hearing Hanlon describe the history of the betrayal Occom felt at the direction Wheelock took Dartmouth, Trustee Hilary Tompkins ’90—an enrolled member of the Navajo Nation—said, “It’s invigorating and refreshing to hear the leader of our College speak the truth about our history. To hear him say that was empowering, and it made me feel like our voices matter and that we are a part of the Dartmouth story. And we can tell the full story, even the painful parts, but we’re stronger for it.”

Members of the executive board of Native Americans at Dartmouth (NAD) were also on hand for the ceremony, and agreed that it was important Dartmouth had taken steps to acknowledge its debt to Occom.

“It’s amazing that I have this opportunity to be a witness to this event. For hundreds of years, the College has had these papers, and now they’re finally being returned,” said Mikaila Ng ’22, a Native Hawaiian, or Kānaka Maoli, who is co-president of NAD. “I hope that we can take this further and recognize Samson Occom as a co-founder of the College, and the contributions that he has made to creating this institution that we’re all benefiting from. And the work doesn’t stop here.”

“It was meaningful and powerful,” said Erin Bunner ’22, a member of the Muscogee Nation, adding that the day’s events were helping to culminate her senior year on a “really hopeful note.”