Posted on May 03, 2022 by Office of Communications

The quarterback and seven other recognized leaders will receive honorary degrees. 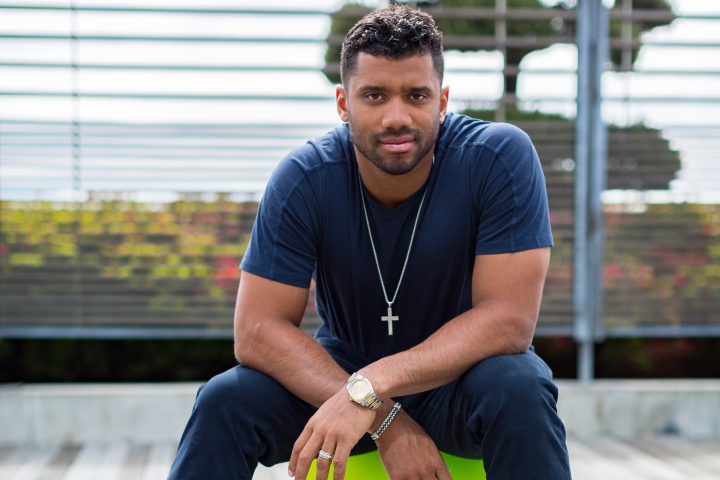 Russell Wilson, a top NFL quarterback who has been widely recognized for his community service, will deliver Dartmouth’s commencement address on June 12.

A nine-time Pro Bowl player, Wilson has won 113 games, including playoffs, the most in NFL history by any quarterback in his first 10 seasons. He led the Seattle Seahawks to a Super Bowl victory in 2014 and in 2021 received the league’s most prestigious honor, the Walter Payton NFL Man of the Year award, recognizing his excellence on the field and his longstanding commitment to giving back.

Wilson will receive an honorary degree at commencement along with seven other leaders in the fields of physics, engineering, economics, media, business and finance, and international development. President Philip J. Hanlon ’77 will deliver the valedictory address to the graduates, and the student valedictory speaker from the senior class will address the graduates during the ceremony.

“Russell Wilson is one of the great athletes of our time, but it’s off the field—as a philanthropist and as an entrepreneur—where his true character shines,” says President Hanlon. “As commencement returns to the Green, Dartmouth is honored to have Russell as our speaker, joining this year’s cohort of outstanding honorary degree recipients whose contributions in a wide range of fields are creating lasting, positive change in the world.”

Fans of Dartmouth and football know that Wilson has deep roots on the Hanover Plain: His father, the late Harrison Wilson III ’77—a Big Green receiver who also played shortstop and third base on the baseball team—and three uncles attended Dartmouth. Benjamin Wilson ’73, a former Dartmouth trustee, was the first of the four Wilson brothers to matriculate, followed by Harrison, John Wilson ’80, and Richard Wilson ’85, who died in 2005.

Russell Wilson is one of the great athletes of our time, but it’s off the field—as a philanthropist and as an entrepreneur—where his true character shines.

“Dartmouth has always held a very special place for me and my family,” said Wilson. “My dad, a Dartmouth alum, was my biggest champion and instilled in me the importance of education and having a ‘Why Not You?’ attitude from an early age—two principles that have guided much of my life. I can’t wait to be there to share some of those lessons with the class of 2022 and celebrate their many accomplishments.”

As a high school student, Wilson spent a summer at Manning Passing Academy, where he was coached by Buddy Teevens ’79, Dartmouth’s Robert L. Blackman Head Football Coach. And he has been known to work out with a Mobile Virtual Player—a robotic tackling dummy engineered by Thayer School of Engineering in collaboration with Teevens to reduce football practice injuries.

A trade in March will have him joining the Denver Broncos in the upcoming 2022-2023 season.

Wilson’s contributions include, among other charitable work, The Why Not You Foundation, which he founded in 2014 to empower youth, promote education and children’s health, and fight poverty.

As a businessman, Wilson leads a diverse portfolio of ventures, including his West2East brand and production company, the House of LR&C fashion house (which offers his Good Man Brand clothing line), and Why Not You Productions, which has a first-look deal with Amazon Studios to develop and produce scripted series. He has also had endorsement deals with several major brands.

Wilson played football and baseball at North Carolina State University, where he earned a bachelor’s degree in communication, and returned to speak at last year’s commencement. He also played two seasons of minor league baseball. He was the 2016 commencement speaker at the University of Wisconsin-Madison, where he was a graduate student in educational leadership and policy before the Seahawks tapped him in round three of the 2012 NFL draft—a bet that paid off, as he was named NFL Rookie of the Year.

Wilson is married to Grammy Award-winning singer-songwriter Ciara, with whom he has co-authored the New York Times best-selling inspirational children’s picture book, Why Not You? The Other Honorary Degree Recipients Are:

Claudia Goldin: Economist and co-director of the National Bureau of Economic Research’s Gender in the Economy group

Charles “Ed” Haldeman ’70: Former head of the Federal Loan Mortgage Corporation (Freddie Mac) and former chair of the Dartmouth Board of Trustees.

About the Honorary Degree Recipients

Shobhana Bhartia is chairman and group editorial director of HT Media Ltd, India’s largest listed media company, which is part of the Birla group. In a career spanning three decades, Bhartia has transformed HT Media from a print-only traditional media company into a professionally run media conglomerate that spans English, Hindi, digital, and FM radio. The only woman chief executive of a national India media group, Bhartia has helped drive HT’s digital transformation to among the largest integrated newsrooms of its kind in the country. The company’s widely read publications and their websites include Hindustan Times, Mint, and Hindustan.

Bhartia has been awarded the Officier de l’Ordre National de la Légion d’Honneur, the US-India Business Council’s Global Leadership Award, E&Y’s Entrepreneur of the Year, and a Padma Shri, one of India’s highest civilian honors. She was named a Global Leader of Tomorrow by the World Economic Forum in 1996.

Bhartia served as a member of the board of governors at the Indian Institute of Technology and the Institute of Marketing and Management, the executive committees of the Federation of Indian Chambers of Commerce and Industry and the Confederation of Indian Industry, and of the Task Force on Chemicals, appointed by the government of India. He is also a member of Governors for Chemistry and Advanced Materials of the World Economic Forum.

He has received a Lifetime Achievement Award from the Basic Chemicals, Cosmetics and Dyes Export Promotion Council, and, along with his brother, Hari Bhartia, received the Entrepreneur of the Year Award at the All India Management Association Managing India Awards, presented by the president of India. The duo also shared an Ernst & Young Entrepreneur of the Year Award.

A strong proponent of corporate social responsibility, he established Jubilant Bhartia Foundation for community development. He is involved in the “SEOY Award-India,” a joint initiative of JBF and Schwab Foundation for Social Entrepreneurship, recognizing promising and successful social entrepreneurs in India.

Claudia Goldin is the Henry Lee Professor of Economics at Harvard University. She was the director of the National Bureau of Economic Research’s Development of the American Economy program from 1989 to 2017 and is currently co-director of the NBER’s Gender in the Economy group.

Most of her research interprets the present through the lens of the past and explores the origins of issues of current concern. Among her many books, she is the author of Understanding the Gender Gap: An Economic History of American Women, The Race between Education and Technology, and Career & Family: Women’s Century-Long Journey Toward Equity.

She received her BA from Cornell University and her PhD from the University of Chicago.

Kul Chandra Gautam, a diplomat, development professional, and human rights activist, is a former deputy executive director of UNICEF and assistant secretary-general of the United Nations. He is chair of the board of the anti-poverty advocacy organization RESULTS.org (USA), and the interfaith organization Arigatou International (Japan); ambassador of Religions for Peace (USA); and a member of the executive committee of the Global Partnership to End Violence against Children (U.N.).

In his long U.N. career, Gautam has served in senior leadership positions at UNICEF in several countries and continents as global director of program and planning. He has also held positions working for the Asia Pacific region and in Latin America, the Caribbean, India, Laos, Haiti, Indonesia, and Cambodia. He was founding board chair of the Partnership for Maternal, Newborn and Child Health and chair of the Micronutrient Initiative/Nutrition International, in addition to service on other boards and programs.

He is the author of Global Citizen from Gulmi: My Journey from the Hills of Nepal to the Halls of United Nations; and Lost in Transition: Rebuilding Nepal from the Maoist Mayhem and Mega-Earthquake. He studied international relations and development economics at Dartmouth and Princeton.

Appointed CEO of the Federal Home Loan Mortgage Corporation (Freddie Mac) in 2009, at the height of the global economic crisis, Haldeman built a new management team and cut costs by 10% in two years. This accomplishment led Bloomberg Businessweek to name him one of the “50 Most Powerful People in Real Estate” in 2010.

At the time, Haldeman—who chaired the Dartmouth Board of Trustees from 2007 to 2012 after serving as a trustee since 2004—was no stranger to taking on leadership of organizations in challenging circumstances. He took on the helm of Putnam Investments in 2003, during a mutual fund scandal. As president and CEO and later chairman, he helped stabilize the business, keep the company profitable, and negotiate its 2007 sale, for $3.9 billion, to Power Financial Corporation. In 2006, CFA Magazine—the journal of the global Chartered Financial Analyst Institute—named him “One of the Most Influential CFA Institute Members.”

The Harold A. Rosen Professor of Physics, and Kent and Joyce Kresa Leadership Chair of the Division of Physics, Mathematics and Astronomy at the California Institute of Technology, Fiona Harrison’s research focuses on understanding some of the hottest, densest, and most energetic phenomena in the universe, as well as developing advanced detectors and instrumentation for future space missions. She is principal Investigator of NASA’s Nuclear Spectroscopic Telescope Array, based on technologies Harrison and colleagues developed over more than a decade.

Among her many awards, she has received the Presidential Early Career award, the NASA Outstanding Public Leadership medal, the Bruno Rossi Prize of the American Astronomical Society, and the Hans Bethe Prize of the American Physical Society. She is a fellow of the American Academy of Arts and Sciences and a member of the National Academy of Sciences (NAS). She co-chaired the 2020 NAS Decadal Survey of Astronomy and Astrophysics, which recommends how the nation should invest in astronomy and astrophysics in the coming decade.

Harrison completed her undergraduate degree at Dartmouth with high honors in physics, earned her PhD in physics at UC Berkeley, and joined the Caltech physics faculty in 1995.

Dava Newman is a professor of astronautics at the Massachusetts Institute of Technology and a Harvard-MIT Health, Sciences, and Technology faculty member. From 2015 to 2017 she served as NASA deputy administrator—the first female engineer in this role—and was awarded the NASA Distinguished Service Medal.

Newman is the co-founder of the nonprofit EarthDNA that focuses on accelerating climate understanding and taking positive actions for spaceship Earth’s ocean, land, and air subsystems, developing an artificial intelligence/machine learning open-source platform, producing ‘satellite imagery of the future’ for Earth’s vital signs, and training future climate leaders with an ambition to make the world work for 100% of humanity.

9 a.m.—Geisel School of Medicine Class Day, outside the Class of 1978 Life Sciences Center. The speaker will be Andrea Hayes ’87, MED ’91, the chairwoman of surgery and the Schneider Endowed Professor at Howard University School of Medicine.

2 p.m.—The Dartmouth Institute Class Day, outside the Class of 1978 Life Sciences Center. The speaker will be T. Greg McKelvey Jr., a physician who is the assistant director for biosecurity at the White House Office of Science and Technology Policy.

9:30 a.m.—Thayer School of Engineering Investiture Ceremony, in front of the Arthur L. Irving Institute for Energy and Society; the event will also be live-streamed, with link provided at a future date. Dava Newman, the first female engineer to serve as NASA’s deputy administrator, will deliver the address.

2 p.m.—Baccalaureate, a multifaith, multicultural celebration for graduates and their families, at the Class of 1978 Life Sciences Center lawn tent. The speaker will be Christena Cleveland ’03, founder and executive director of the Center for Justice and Renewal.

3:30 p.m.—Guarini School of Graduate and Advanced Studies Ceremony Investiture Ceremony, on the Green; a master’s and a PhD student will speak at the investiture.

9 a.m.—Academic procession to the Green, commencement ceremony begins at 9:30 a.m.