Finding Community and Building a Legacy

Commencement speakers: Ask important questions, like ‘Why Not You?’ 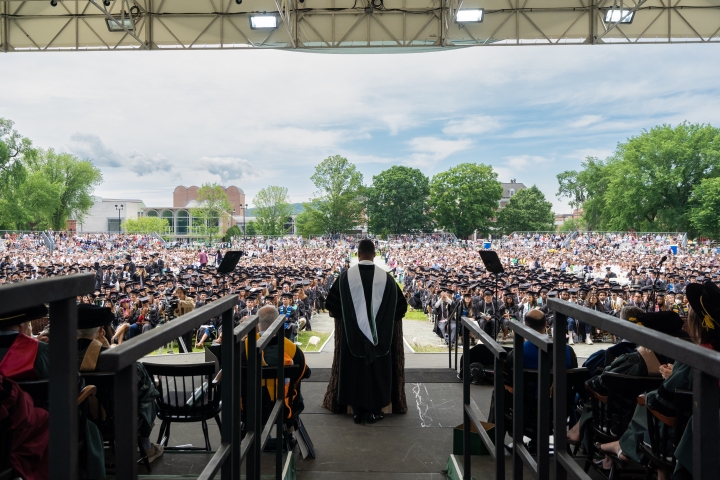 Russell Wilson, a community-minded star in the NFL whose father and three uncles went to Dartmouth, addresses commencement attendees on the Green on Sunday morning. (Photo by Julia Levine ’23)
Body

On a balmy Sunday morning, with the global pandemic finally in retreat, bagpipes and a brass quintet heralded a return to tradition as some 8,000 people gathered on the Green to celebrate commencement.

Dartmouth conferred more than 1,800 bachelor’s, master’s, and doctoral degrees in undergraduate and graduate programs from the College, the Geisel School of Medicine, Guarini School of Graduate and Advanced Studies, Thayer School of Engineering, and the Tuck School of Business.

Erin Bunner ’22, a member of the Muscogee Nation, and Mikaila Ng ’22, a Native Hawaiian, the co-presidents of Native Americans at Dartmouth, opened the ceremony by acknowledging that Dartmouth stands on “unceded and ancestral homelands of the Abenaki people.”

While Bunner said it took too many years to honor fully the founding mission advanced by Samson Occom to educate Indigenous students, she commended former president John Kemeny for rededicating the College to that purpose in the 1970s, and Dartmouth for repatriating Occom’s papers to his Mohegan tribe this year. NFL quarterback Russell Wilson addresses graduates, including a story about lessons he learned from his father, the late Harrison B. Wilson III ’77. (Photo by Eli Burakian ’00)

In a moving commencement address, NFL quarterback Russell Wilson vividly recalled life-changing conversations with his father, Harrison Wilson III ’77. One night, when Wilson was a short, teenaged football player competing for attention at Peyton Manning Passing Academy, his father asked the question that would become his guiding light:

“‘You know, you could play against the Manning brothers one day. You could play in the NFL,’” Wilson recalled. “And I was a confident kid, but I must have given him a look like, ‘Are you sure?’ Because he looked me right in the eye and said: ‘Why not you?’”

Years later, on his deathbed, Wilson’s father issued another challenge that still resonates with his son, who went on to win a Super Bowl and is known for his community activities.

But with that weight, Wilson said, comes responsibility.

Wilson, whose wife, the entertainer Ciara, accompanied him to Hanover, has been building his own legacy, both on and off the field.

The couple are also entrepreneurs and are co-founders of the Why Not You Foundation, which is dedicated to education, children’s health, and fighting poverty.

Community service loomed large in the commendation he received from President Philip J. Hanlon ’77, who awarded Wilson, and seven others, honorary degrees. In his farewell to the Class of 2022, President Hanlon acknowledged that, 18 months into their time at Dartmouth, they entered a difficult moment, when the global pandemic had “turned the world upside down,” and raised life-or-death questions.

“Who was most vulnerable and how do we protect them? How could we create vaccines to arm our immune systems? With questions in hand, we were able to gather evidence, apply reasoning, debate with those who disagreed, and ultimately determine a collective course of action.”

“You are entering a world with some deep troubles. War. Inequity. Global warming. Gun violence. A mental health crisis exacerbated by the pandemic. These are thorny issues for which there are no easy answers. But with the right questions, you can see your way through.”

In actively seeking out answers, Hanlon urged the graduates to open their minds to alternative viewpoints. A First-Gen Valedictorian: “My Voice Mattered”

One of the 13 valedictorians, Melissa Barales-Lopez, spoke in her address about how “terrified” she was about coming to Dartmouth when, at the Los Angeles airport, her parents and five younger siblings saw her off.

“I waved one last good-bye to my family from across the room, turned the corner, and promptly broke down into tears,” Barales-Lopez, the first in her family to attend college, recalled. But at Dartmouth, she said, she found community in the First-Generation Office, and in student groups working to meet the needs of undocumented community members and to increase bargaining power by student workers on campus.

“They encouraged me to pursue research, supported me as I wrote my thesis, and made me feel like my voice mattered as much as anyone else’s,” she said. “I am immensely grateful for the faculty and staff who prioritized my academic growth and that of my peers. They played a critical role in making Dartmouth my home.” Two close friends, Shera Bhala ’22, left, and Kelley Jiang ’22, met on the first day of class and have come full circle, on the very last day, together. (Photo by Corinne Arndt Girouard)

After the names of 1,072 undergraduates were read, and the ceremony drew to a close with the singing of Alma Mater, two close friends said how happy they were to be able to celebrate together, in a place they love, with people they care about.

“I was giving my family and our family friends a tour of the library yesterday, through the Tower Room, through the stacks, and the reading room,” said Shera Bhala ’22, a Fulbright scholar. “There are places here that are so uniquely Dartmouth and literally couldn’t be any other college, and that’s why today is so important.”

Kelley Jiang ’22 agreed. “You know, when we got here on the first day, we kind of expected a linear journey, year by year, but it’s been kind of bumpy, at times, and circular. Now we’ve actually come full circle on the very last day, together.”

As always, commencement day capped a week packed with year-end activities and reunions.

Geisel held Class Day on May 28 and The Dartmouth Institute’s exercises followed on June 10.

On Saturday, June 11, at a multifaith baccalaureate, Christina Cleveland ’03, a social psychologist, public theologian, author, and activist, gave the keynote address, “Think and Wonder, Wonder and Think: On Cultivating a Rigorous and Fanciful Spiritual Imagination.”

Also on Saturday, the Guarini School, Thayer, and Tuck held their investiture ceremonies, and five graduating seniors received commissions as members of the U.S. military.