Posted on August 06, 2022 by Charlotte Albright

More than half the class traveled to Hanover for the ceremony on the Green. 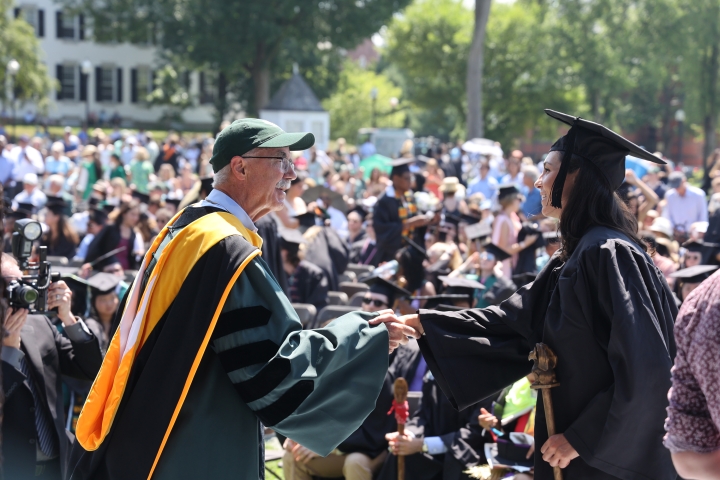 President Philip J. Hanlon ’77 congratulates a member of the Class of 2020 during the long-awaited celebration on the Green for the class that had its graduation held remotely during the pandemic. (Photo by Herb Swanson)
Body

Under a sweltering August sun, two and a half years after COVID-19 moved their commencement ceremony online, more than 800 graduates—well over half the Class of 2020—were back on campus today, finally wearing their caps and gowns, marching to the Green to the tunes of bagpipes and a brass quintet. More than 2,000 guests cheered them on.

“We assured the ’20s that we would welcome them home to Dartmouth as soon as possible for a traditional celebration,” says Vice President for Alumni Relations Cheryl Bascomb ’82. “I’m thrilled so many have come—some from across the globe—to reunite and get re-acquainted with each other.” Geeta Anand ’89, dean of the University of California at Berkeley Graduate School of Journalism, told members of the Class of 2020 to have the courage to know when it is time to move on to the next chapter of life. (Photo by Rob Strong ’04)

Graduating Into a ‘Strange’ but ‘Awesome’ World

Keynote speaker Geeta Anand ’89, a Pulitzer Prize-winning journalist and author and dean of the University of California at Berkeley Graduate School of Journalism, acknowledged the “strange, scary—but also incredibly awesome world” the graduates have been navigating since receiving their degrees.

“Strange because the global pandemic that derailed your graduation plans continues to disrupt and destabilize our lives. Stranger still because months after we all witnessed the attempted coup against our government, nearly half of the country continues to believe the falsehood that the election was stolen.”

Political wrangling has also dangerously slowed the response to climate change, said Anand. Yet, as she expressed confidence that a resilient Class of 2020 will meet unprecedented challenges, she gave a piece of advice rarely heard in a commencement speech.

“As a person who is deeply committed to the fight for change, I am going to talk to you today about the importance of quitting—of saying that’s it, I’m done,” she said.

Anand’s journalism career has indeed taken sharp twists and turns. After finishing The Cure, a book based on her Wall Street Journal stories about John and Aileen Crowley, who launched a biotech company to save their children from a rare, possibly fatal genetic disease, Anand left her “dream job” with the Journal’s investigative team and moved with her husband and two small children to Mumbai, her hometown, becoming a foreign correspondent for The New York Times. She left that job to care for her ailing father. After he died, she shifted gears again. Leading a school of journalism, she said, “is the most meaningful job I have had in my entire life.”

“Quitting will, at times, be scary,” Anand said. “But if you are paying close attention, you will know when to close one chapter in order to open up new opportunities to experience greater meaning, joy—and yes, to experience the incredible awesomeness of life.”

“We canoed on the tranquil rivers of New Hampshire, played frisbee on an abandoned airstrip, freestyle rapped, talked late into the night, and even saw a bald eagle soar above us,” he recalled about his first-year trip in 2016. But that sense of calm was soon shattered, off campus, by turmoil. A consequential presidential election. A worldwide pandemic. The killing of George Floyd and attacks on Asian-Americans, “sparking a racial reckoning.” Through it all, Holman said, the Class of 2020 not only persevered; they made—and continue to make—positive impacts: starting an online platform to help fund and equip essential workers, providing emergency medical care, fighting hunger, advocating for the rights of people with disabilities, developing a mobile app for mental health, even running for local elective office.

“I ask of you this,” Holman said. “Fight the fight and lead the way when future conflicts, injustices, and challenges arise on our lifetimes.” Bagpiper Joshua Marks ’96 leads members of the Class of 2020 from the Bema to the Green, where they celebrated their commencement—two years after taking part in a graduation ceremony held online due to the pandemic. (Photo by Julia Levine ’23)

Although degrees were officially conferred at the virtual ceremony in 2020, class members had to wait until today to hear their names ring out from loudspeakers, and to receive congratulatory handshakes and a valedictory address from President Philip J. Hanlon ’77. “At a typical commencement, my job as president is to offer one nugget of advice to new graduates just moments after they officially become alumni. Today is a little different. You come to this moment having the benefit of two full years of experience in the real world. Two years to reflect on the value of your liberal arts education. If we did our jobs well, your Dartmouth education literally transformed your minds,” Hanlon said. “We equipped you with broad knowledge of the world and a recognition of what piques your curiosity.”

For Junatt Anwar ’20, who majored in applied mathematics and now works in finance at Goldman Sachs in Boston, the ceremony was a chance to satisfy a different kind of curiosity, about what her classmates have been up to since they abruptly left campus near the end of their senior year.

“It’s a special feeling, being back here, that you can’t get at a reunion in Boston or New York,” she said. “Crossing the bridge over the river reminds me of sophomore summer, and hearing Baker Bells—each spot has a different memory attached to it,” she said.

The celebration held special meaning for Karla Rosas ’20, who came to Dartmouth after serving as a senior airman in the U.S. Air Force and, as a veteran, carried the eagle staff in the procession. Although she works in consulting in Washington, D.C., she says Hanover still feels like home.

“As an older student who at first felt out of place, I definitely found my community here,” she says. “It’s like a big family.”