Posted on October 04, 2022 by Harini Barath and Aimee Minbiole

The president-elect met with students, President Hanlon, and other Dartmouth leaders. 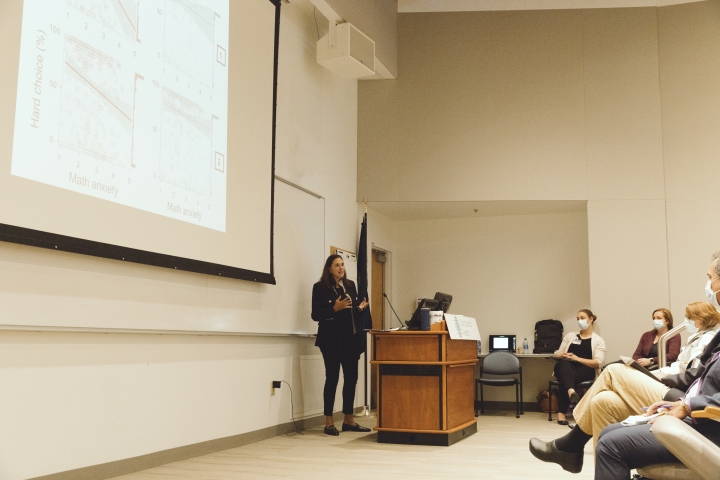 President-elect Sian Leah Beilock visited campus on Tuesday to meet with senior Dartmouth officials and students and to deliver a keynote speech about her research on anxiety and performing under pressure at a Geisel School of Medicine forum.

Beilock, a leading cognitive scientist and president of Barnard College, met in the morning at Parkhurst Hall with President Philip J. Hanlon ’77, who is stepping down in June after a decade at the helm.

Beilock and Hanlon chatted for a few minutes before heading into the president’s office for a longer conversation about the presidential transition. The two have known one another through their work on the Consortium on Financing Higher Education. She also met in the morning with faculty from the Department of Psychological and Brain Sciences in Moore Hall. The former Stella M. Rowley Professor of Psychology at the University of Chicago, Beilock will hold a tenured position in the department.

Beilock later lunched at Pine at the Hanover Inn with Provost David Kotz ’86; Alexis Abramson, dean of Thayer School of Engineering; Jon Kull ’88, dean of the Guarini School of Graduate and Advanced Studies; and Elizabeth Smith, dean of the Faculty of Arts and Sciences.

She then spoke to Geisel students, staff, and faculty during her talk at the medical school’s inaugural Educational Affairs retreat, held at Dartmouth Hitchcock Medical Center in Lebanon, N.H.

The “Performing Your Best Under Pressure” presentation summarized Beilock’s research on understanding the causes of why people choke under pressure and, importantly, in formulating strategies to help people—from young students to Olympic athletes—put their best foot forward even in stressful situations.

Beilock highlighted her research on math anxiety and how observing math-phobic people as they tackle problems offers a window into understanding what happens in the brain and body in other stressful situations as well.

Brain scans taken as people braced for and attempted to solve math questions showed that performance anxiety evoked neural responses that resembled pain, she said. The negative emotions that rise up in such situations impact focus, and subsequently, performance, she noted.

“There’s something about anxiety that’s separate from just being good or bad,” Beilock said.

She went on to detail how people can leverage this knowledge to harness their potential when it matters most. One way to help is by creating what she calls “brave spaces,” rather than safe spaces, that invite people to speak their mind or practice their skills in uncomfortable situations. Another is to encourage people to reinterpret signs of anxiety, such as sweaty palms, more positively, as a sign of preparedness rather than a precursor to failure.

The anxiety that people feel under pressure, she said, “is something we need to study, and there are specific things we can do to help ourselves and our students perform better so that when it matters, most are able to succeed.”

Beilock took several questions in a Q&A session and acknowledged the grief that the Dartmouth community has endured following the death of several community members.

“I come into Dartmouth today with a realization and awareness that it’s been really a difficult couple of weeks here. And I think if you take one thing from my work it’s that anxiety is real, right, and it’s something that we have to address and figure out. And that is not just something that sits alongside success, but is part and parcel of success.”

Beilock said that applies to such issues as diversity, equity, and inclusion as well. “We know from tons of psychological science research that the best companies, the best ideas, the most creative solutions, come when you have different people with different lived experiences feel like they can be at the table and push,” she said. “DEI is not something that sits next to academic excellence. It is necessary for it.”

Beilock received the National Academy of Sciences’ Troland Research Award in 2017 for her groundbreaking research on anxiety and performance in stressful situations, and a Ted Talk she gave on performing under pressure has drawn more than 2.6 million viewers.

“We are delighted that Dr. Beilock joined this vibrant community of educators and learners and are grateful for the research and insights that she shared with us,” said Sonia Nagy Chimienti, Geisel’s senior associate dean for medical education.

Beilock also met on Tuesday with Geisel Dean Duane Compton. And before leaving campus, she spent the better part of an hour with the Student Liaison Committee and Hanlon.

Beilock’s visit to Hanover also had a personal dimension. She was accompanied by her daughter, Sarah, and they visited the Richmond Middle School in Hanover and the president’s house, their future home.