Watch work by students of "FS1:Intro to Film: From Script to Screen," who remade nine versions of “Glimpse of the Garden” (1957) by Marie Menken. 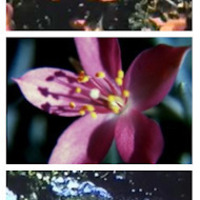 This exhibition features the work of students from FS1:Intro to Film: From Script to Screen. Working together in groups of five, the class created nine remakes of the short film “Glimpse of the Garden” (1957) by Marie Menken.

Described in a catalog from Amos Vogel’s “Cinema 16,” as “lyric, tender, intensely subjective exploration of a flower garden, with extreme magnification, flashing color harmonies,” and by Light Cone as “a simple, unassuming observational film,” “Glimpse of the Garden” provided an open palette - a springboard - from which students could begin to cultivate their own cinematic languages. Each student completed one-minute segment of the film. The concept of nature and the degree to which the cinema and technology in general mirrors natural phenomena carried our class throughout many discussions, viewings, and projects. Another topic that frequently surfaced - archives and the defining of History - relate to this project. As high-quality copies of “Glimpse of the Garden” remain inaccessible to the general public, this class’ labor serves to create a new kind of speculative archive created through reverse engineering.