The Fall of Afghanistan: Views From the Middle East--Oct 11 at 5 pm 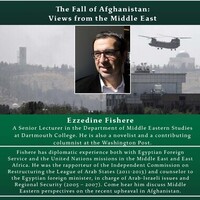 How does the fall of Afghanistan look to the peoples and states of the Middle East? And what are the prospects for a liberal future in that part of the world?

Ezzedine Fishere (Middle Eastern Studies) has worked with the Egyptian Foreign Service and with U.N. missions in the MIddle East and East Africa, among others. He is also a novelist and a regular columnist for the Washington Post on Middle Eastern affairs.

Co-sponsored by the Political Economy Project and the Dickey Center for International Understanding, this event is free and open to the public.

Those unable to attend in person may join a Webinar of the event here.