Director Sean Baker continues his strong career of shedding light on the fringes of American society with incredibly human stories and Simon Rex delivers a hustler for the ages. 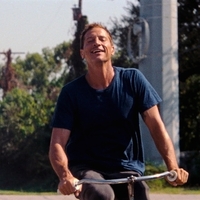 The audacious new film from writer-director Sean Baker (The Florida Project, Tangerine), is a darkly funny and humane portrait of a uniquely American hustler and a hometown that barely tolerates him. Played by Simon Rex in a magnetic, live-wire performance, former porn star Mikey Sabe might be "blessed" but the reality of the situation is that the guy is nothing less than a living curse. He's a well endowed, self-obsessed, hyper-opportunistic hex of a man whose puppy dog con artist schtick is so transparent that even naive teenagers can see right through it, which is exactly why people lower their guard and let him in. Into their houses; into their beds; into their dreams for the future that Mikey incepts into their heads for his own benefit. And he doesn't stop trying to weasel his way deeper into any of those things for a single minute of Sean Baker's utterly singular and weirdly lovable roman candle of a movie that wonders if America's pathological narcissism will ever burn itself out. D: Sean Baker, US, 2021, CC

For more information, contact:
Hopkins Center for the Arts
hopkins.center.for.the.arts@dartmouth.edu
603-646-2422
Permanent URL to this event: https://president.dartmouth.edu/events/event?event=65395