The Islamic Historiography of Africa and the Decolonization of Knowledge

As part of its Black Histories Lecture Series, the History Department is pleased to welcome Professor Wendell Hassan Marsh, Rutgers University-Newark, to Dartmouth. 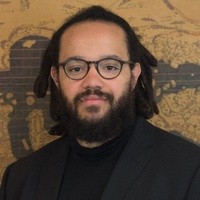 In May of 1924, the Muslim intellectual Shaykh Musa Kamara from colonial Senegal sent hundreds of unbound manuscript pages to be reviewed, edited, and translated for publication. After years of consulting Arabic manuscripts and collecting oral testimonies from griots, village chiefs, and others, Kamara hoped to see his reconstruction of West African history in print. He never would. This talk tells the story of this monumental text, Zuhur al-Basatin fi Tarikh al-Sawadin, or Flowers in the Gardens of the History of the Blacks, also known as Intisar al-Mawtur, or the Victory of the Wronged. The text, and Kamara’s body of work in general, is pivotal to understanding the broader Islamic historiography of West Africa. In addition to narrating the reception of this work, Professor Marsh considers theoretical questions about what decolonization might mean and what its limits might be if we think from Muslim West Africa.

Wendell Marsh is Assistant Professor of African American and African Studies at Rutgers University-Newark. He is a post-disciplinary scholar of Islam in Africa, textuality, and the theory and practice of African Studies. His first research project on the Muslim polymath from colonial Senegal Shaykh Musa Kamara stages a reflection on the entanglements of Africa, Islam, and modernity, by way of a close study of the forms of textual knowledge produced by and about Kamara over the course of the twentieth century. He was awarded the Ford dissertation fellowship for his work.

Originally from Atlanta, GA, Wendell stayed close to home to attend Morehouse College (’09) where he finished Phi Beta Kappa in English and French. But since, he has travelled, lived, studied and worked in France, Senegal, Morocco, Egypt, and Kenya. Upon graduation from college, Wendell was awarded the Fulbright fellowship to study Arabic in Egypt for 18 months.