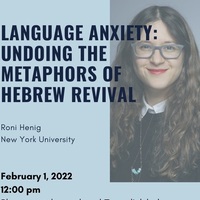 Abstract:
Such metaphors of life and death, procreation and destruction, have long
dominated the debates concerning the revival of the Hebrew language—a
conversation first begun in eighteenth century Europe and that continues in the
modern State of Israel today. This talk traces major trends in the literary
discourse of Hebrew revival, including the concerns that many Hebrew authors
expressed for the future “life” of the language. As evident in the work of
such central writers as Ahad Ha’am, M.Y. Berdichevsky, and H.N. Bialik, the
story of Hebrew revival was often narrated through the lens of crisis. Entwined
with tropes of illness, disintegrated bodies, birth and death, the revival of
Hebrew thus foreshadowed a nearing disaster that was encapsulated in the figure
of the unborn. I argue that it was precisely the generative potential of
revival, which was crucial to the national cause, that simultaneously posed a
threat to the project of nation building.

BIO:
Roni Henig is an Assistant Professor of Modern Hebrew Literature in the
department of Hebrew and Judaic Studies at NYU. She completed her Ph.D. in
Hebrew and Comparative Literature at Columbia University. Her work focuses on
critical literary theory, language politics, dysfluency studies, and the
critique of nationalism across Jewish literatures and beyond. She is currently
completing a book manuscript titled Life of the Non-Living: The Narrative of
Language Revival in Modern Hebrew Literature, which critically explores the
question of Hebrew revival in early twentieth century Hebrew literary
discourse. Prior to joining NYU, she was a research fellow at Columbia
University Institute for Ideas and Imagination in Reid Hall, Paris. Her work
has been awarded the Baron dissertation prize and the Aldridge Prize for best
essay by the American Comparative Literature Association.