A movie of infinite tenderness, Pedro Almodóvar's newest is a rare ode to motherhood that acknowledges mothers as women first and mothers second. 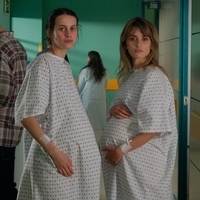 In this muted contemporary melodrama, two women, a generation apart, find themselves inextricably linked by their brief time together in a maternity ward. The circumstances that brought them to the Madrid hospital are quite different—one accidental, the other traumatic—and a secret, hiding the truth of the bond that connects these two, is a powerful story that tackles a deep trauma in Spanish history. Penélope Cruz's Janis is a uniquely complex, flawed, but ultimately alluring lead character, who finds herself in a morally and emotionally treacherous situation. She's viewed in contrast with Ana, radiantly portrayed by newcomer Milena Smit, a discovery who brings a palpable innocence, pain and longing to this interwoven portrait of women and motherhood. These charismatic stars inhabit characters who are singular among those drawn by Almodóvar in a career defined by striking portraits of women. D: Pedro Almodóvar, Spain, subtitled, 2021

For more information, contact:
Hopkins Center for the Arts
hopkins.center.for.the.arts@dartmouth.edu
603-646-2422
Permanent URL to this event: https://president.dartmouth.edu/events/event?event=66003