The Leslie Center presents a virtual series of eight discussions with poets, journalists, editors, and translators from Ukraine. 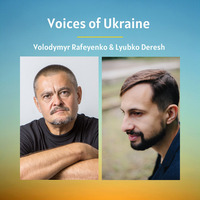 Lyubko Deresh is a Ukranian writer. He wrote his first novel, Cult, at age eighteen. He has since authored ten additonal books of prose and two children's books. Deresh is sometimes called the "Ukranian Stephen King," and every new release is hotly anticipated by both his fans and the press. One of the most widely translated Ukranian authors in Europe, Deresh has been translated into German, French, Italian, Polish, Serbian, Bulgarian, and Romanian. He is a two-time finalist of the BBC Book of the Year Award for his novels Intent! and A Bit of Darkness, and his novella Jacob's Head is scheduled to be adapted into a movie in Ukraine. Lyubko currently resides in Kyiv, Ukraine.

Volodymyr Rafeyenko is an award-winning Ukranian writer, poet, translator, and literary and film critic. Having graduated from Donetsk University with a degree in Russian philology, he wrote and published in Russian for years. Following the outbreak of Russian Agression in Ukraine's east in 2014, Rafeyenko left Donetsk and moved to a town near Kyiv, where he leanred Ukranian and wrote Mondegreen: Songs about Death and Love, his first novel in Ukranian. This novel came out in English with Harvard University Press in the spring of 2022, and the translation of another novel, The Length of Days: An Urban Ballad, was published later that year. Rafeyenko is also the editor of the volume War-22, an anthology of works writeen by Ukranian authors since February 24, 2022, the day Russia launched its full-scale (and-ongoing) invasion of Ukraine.