There is nowhere darker than the future. A provocative film and live talkback on disability and our collective responsibility. 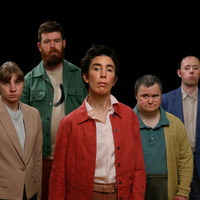 What is normal? How do we make decisions that best serve a civic society? How can we save the world? At a town hall meeting, a group of activists discuss these questions, weaving a narrative through human rights, sexual politics and the projected dominance of artificial intelligence. Adapted from the award-winning stage play THE SHADOW WHOSE PREY THE HUNTER BECOMES, this film event is a sly theatrical revelation reminding us that none of us are self-sufficient and all of us are responsible.

SHADOW was produced by Australia’s internationally acclaimed Back to Back Theatre, a company with an ensemble of actors with disabilities at its core. Their work aims to question the assumptions we hold about theater, ourselves and others. The film makes its way to the Hop following a screening at the world-renowned theater festival Under The Radar, where the play was a big hit in 2020.

The film runs for 56 minutes, and is followed by a conversation with the artists.