...About about Race, Gender, and Class presented by Elizabeth Losh, Director of the Equality Lab, Professor of English and American Studies 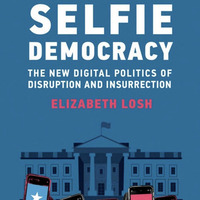 Based on interviews with White House insiders, archival research, and a trove of digital data, Elizabeth Losh's new book Selfie Democracy examines tech policy, digital literacy and attitudes about data and democracy. In addition to revealing important insights about the social media and smart phone practices of the most significant actors in recent American politics—Barack Obama and Donald Trump as presidents and Hillary Clinton and Joe Biden as presidential candidates. Such powerful political leaders often reinforce certain cultural assumptions about the power of the smartphone that perpetuate myths about connection, transparency, participation, and access. These myths are further amplified in rhetoric borrowed from Silicon Valley about how these technologies supposedly strengthen social bonds, enable exploration, encourage engagement, and overcome barriers. Obama might have been the anti-Trump and Trump the anti-Obama, but they both used mobile computing in ways that redefined the office of president. This talk exposes the unintended consequences of wireless technologies on political leadership and shows how seemingly benign mobile devices that hold out the promise of direct democracy can ultimately undermine representative forms of government, as the January 6th, 2021 storming of the US Capital by a selfie-taking mob livestreaming the insurrection demonstrates.

She is the is the author of Virtualpolitik: An Electronic History of Government Media-Making in a Time of War, Scandal, Disaster, Miscommunication, and Mistake (MIT Press, 2009), The War on Learning: Gaining Ground in the Digital University (MIT Press, 2014), Hashtag (Bloomsbury, 2009), and Selfie Democracy: The New Digital Politics of Disruption and Insurrection. She is the co-author of the comic book textbook Understanding Rhetoric: A Graphic Guide to Writing (Bedford/St. Martin's, 2013; second edition, 2017) with Jonathan Alexander, editor of the collection MOOCs and Their Afterlives: Experiments in Scale and Access in Higher Education (University of Chicago, 2017), and co-editor of Bodies of Information: Intersectional Feminism and Digital Humanities (University of Minnesota, 2018)

Free and Open to the public