Explaining Putin: The Man Behind the War in Ukraine

A book talk with the author of "Putin," Philip Short 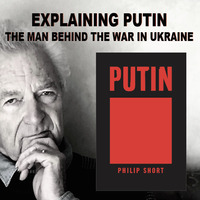 Philip Short, former foreign correspondent in Moscow, Beijing, and Washington, D.C., for the BBC, the Economist, and the Times of London. Author of definitive biographies of Mao, Pol Pot, and François Mitterrand. Philip spent the 2018-19 academic year with the Dickey Center as the Magro Family Distinguished Visitor in International Affairs, while conducting research for Putin.

With Russia’s invasion of Ukraine now in its ninth month and Russian forces in surprising retreat, the question remains of how history, geography, and personality led to the largest conflict in Europe since 1945 – one that appears to be entering a more dangerous phase. How did we get here, did it have to happen, how might it be resolved, and with what consequences?

Join us for a fascinating discussion with Philip Short, author of the recently published biography, Putin, which draws on deep research to reveal the man behind the invasion of Ukraine which has dragged Russia back to a dark past. In light of the setbacks Russia has suffered in the face of stubborn Ukrainian resistance, signs of growing discontent at home, and an economy facing long term debilitation, might an alternate title be “Putin - A Comeuppance Long in the Making?”

Philip Short’s career includes serving as a foreign correspondent in Moscow, Beijing, and Washington, D.C., for the BBC, the Economist, and the Times of London. He is the author of definitive biographies of Mao, Pol Pot, and François Mitterrand.

Sponsored by the Initiative for Global Security at the John Sloan Dickey Center for International Understanding. Dartmouth College. Free and open to all.